www.czech-mountains.eu
Jáchymov, a spa town, lies on the northwestern edge of Bohemia and is part of the Karlovy Vary region. Jáchymov is called the gate of the Ore Mountains. The picturesque natural surroundings of Jáchymov have facilities for individual or family recreation. Jáchymov is located at the foot of the mountain Klínovec, a popular ski and recreation area.
More about Jáchymov Jáchymov - Interesting points in surrounding
Hotel Orix
Hotel, Jáchymov 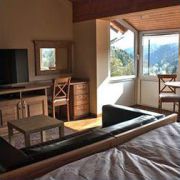 Hotel
Place: Jáchymov
Small mountain family hotel is located in Jáchymov in the Ore Mountains. The hotel has been completely renovated … More » in 2016. It is located less than 200m from the world-famous radon spa. Location is ideal for walks, cycling trips, relaxation and winter sports.
Complete presentation